We will be performing our entire concept album "Saturday Night" at the Cincinnati Fringe Festival. One night only. Door open at 7pm. Tickets are $15.00

Musical story of a man, his friends, his psycho ex-girlfriend, tacos, and love lost and found. Guitar driven prog/pop/rock with catchy melodies and dry humor wrapped up in a multimedia presentation. Designed as a full story/album with a companion comic book, the live event incorporates images projected behind the band.

The Infinity Ball with Ross Caster

Grooving On The Green, Wyoming, Ohio

The Infinity Ball with Majestic Man and Celestials

The Infinity Ball with Celetials and Howard Brothers Band

Wyoming Grooving On The Green

Free outdoor show for the City of Wyoming 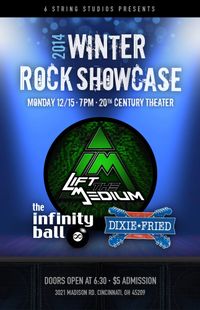 Join us for a rockin' good time with three area bands at the historic 20th Century Theater in Oakley. Doors open at 6:30, show starts at 7:00. Admission is $5.00 at the door. All ages welcome.

The Infinity Ball is a fun 4-piece pop rock band with a "touch of prog." Shifting easily between rock and latin-inspired pop, they create a diverse but focused sound with catchy melodies and dry humor. Sounds Like: Barenaked Ladies, Led Zeppelin, Marillion, RUSH and Vertical Horizon. Listen to their debut album: http://reverbnation.com/theinfinityball. 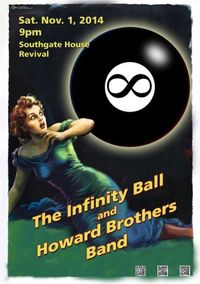 Join us and the Howard Brothers Band. We'll be playing the entire new CD "Saturday Night"!

Come and watch us perform the entire new CD. The $10 ticket includes a copy of both the new CD "Saturday Night" and the Graphic Novel that accompanies it.